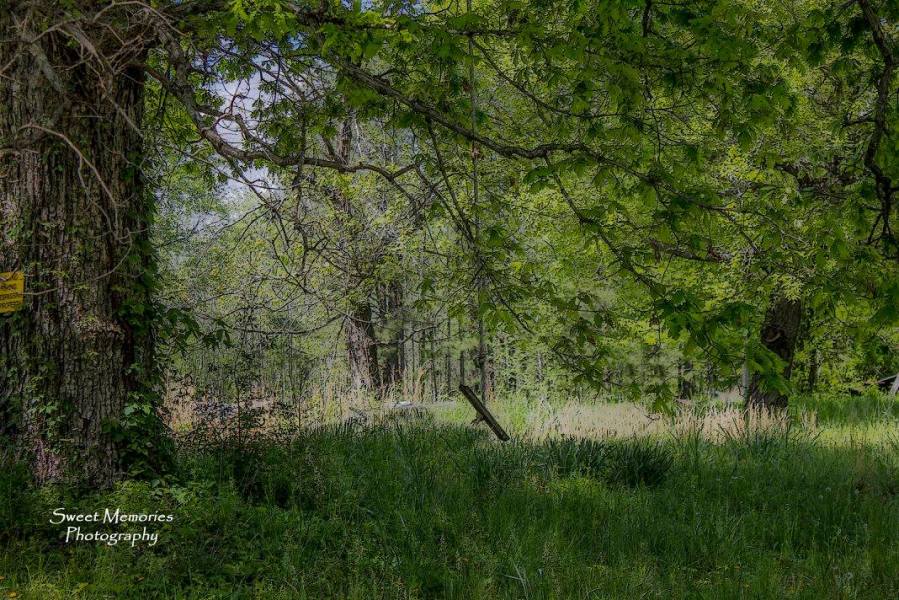 In the first episode, Swing, alone in the Wood, heard voices and feet running toward him. Then….

Jerry was the first to reach Swing, laying his hand gently on his rough, weather-worn seat. “Look, Bobby, he IS still here! He’s barely hanging by the rope, though. Don’t you think it would be fun to come back out and try to fix him?”

Bobby reached out and grabbed the large wooden disk that hung loosely on it’s rotten rope. He shrugged and said, “I don’t think so, Jer. He’s too far gone. It would take too much work and time. Besides, where would we get the stuff?” He looked sympathetically at his little brother, “It’d be best to just forget about it.”

“No, we could do it,” Jerry pouted, stomping his foot, “He isn’t too old! You just don’t care, like all the other kids who used to play here.” He pulled down on the rope, looking up into the tree. “Don’t you remember the fun we used to have? All the other kids and families would come, too. We even had ball games and stuff out in the field.”

“Can this really be happening?” Swing thought to himself. “Please guys, I felt hopeful, almost happy again when Jerry gave me a gentle push. Don’t you remember the fun we used to have? It was a great time. I’m not too old. With just a little help I can make so many kids happy again.”

Bobby walked around for a while, exploring the old Park, throwing sticks and kicking dirt clods. Swing knew he wasn’t really paying attention anymore. But Jerry sat on the ground and pushed him gently, first one way, and then the other. He would look at him, examining the worn seat, looking up into the tree where Swing was tied to a large branch. It was as if Jerry, too, were remembering the fun he had on Swing. Swing smiled widely, “I would give them such high swings, they could see the tops of the other trees in the Park.”

The sun felt warm and Swing found the breeze wonderful, the way it played through the trees and gently set him to swaying. He was content with the young boy walking around him, touching him lovingly.

“Come on, Jerry, it’s time to leave,” Bobby said. “It’ll be dark soon and we found out what we wanted to know. He’s still here.”

Much to Swing’s surprise, Jerry’s small, quiet voice replied, “No! You can leave. I will stay with Swing.”

“Come on Jerry, you know I can’t leave you,” Bobby said, grabbing his brother’s shirt and jerking him up. “And you know I have a date tonight.”

Jerry jerked away from him. Swing sat very still, watching the two boys. “I knew that was why you wouldn’t even try to help Swing. A dumb girl. She never even met Swing!”

Jerry took hold of Swing, saying, “Don’t worry, I’ll be back, even if he doesn’t.”

Swing leaned into the boy, feeling a little sad. The boy turned and walked slowly after his brother, his shoulders hunched and his head down. Swing whispered to himself, “It will be okay, Jerry. I know we will meet again and it might be different, but we will always be friends.”

All Bobby could think about on the way home was his date with Jenny. It was a first for both of them, and he didn’t know what they would talk about. But he knew how lucky he was to have gotten her to agree to go out with him.

Jerry thought he would try a different tactic, “Bobby, why does Jenny’s sister have to babysit me? You know I’m nine now and can stay by myself.” Jerry hoped to be left alone so he could sneak back out and visit a little longer with Swing.

“No way, buddy! Mom and Dad would have my hide, so stop thinking about it and don’t ruin my date. Got it?”

Bobby had to pick up Jenny, and her sister, “The Babysitter”, and bring her back to the house before Bobby and his date could leave.

“Don’t worry,” Jenny said, on the way back to the house. “He’s in good hands. I bet he’ll be smiling and telling tales with Kate before we’re at the movies,” Jenny said. “He’ll be fine.”

“I’m Kate,” she said, “The Babysitter.” She looked into his sad eyes. “Nice to meet you, Jerry. What would you like for dinner? We can order pizza, or I can make PB&J. Sorry, that’s all I can cook.”

He shrugged his shoulders, “Aw, PB&J is fine. I’m not that hungry.”

When they sat down with sandwiches and milk, and Mom’s brownies for dessert, Jerry said, “Can you keep a secret, a big secret? It could be like an adventure.”

“Sure, just because I’m a girl doesn’t mean I don’t like adventures,” Kate said. “Come on, spill it.” She pulled her legs up under her on the couch, looking at Jerry attentively.

“Well, there’s this place at the edge of the woods where we used to play when we were kids,” he started.

“When you were kids, huh?” A smile tugged at the corners of her mouth.

That’s all it took; soon Jerry had told her the whole story about Swing.

Kate looked at him seriously, and then said, “Guess what, Jer? My sister and I used to go out to that Park when we were kids and play there, too. I remember Swing.”

His eyes wide, he said, “Really? You know Swing? He was the best. But now he’s old and barely hanging on his rope. I made Bobby take me out there this afternoon and it was almost like I could hear him talk to me. I pushed him around a little bit, and then I started remembering how high he would swing me, almost to the treetops. It was so much fun. It was good to see him again.”

He smiled, and Kate watched his eyes shine as he told her about Swing. “You know, I remember that, too.”

A short time later Kate heard someone at the door. “No it can’t be ten-thirty already, we haven’t finished sharing our stories about Swing. But you better hurry. Run to your room, I’ll stall them until you’re under the covers,” Kate told him.

“Hi, I’m Teri, Bobby and Jerry’s mom. You must be Kate. Did I just hear voices?”

“Um… uh… ah… well, I mean you might have,” Kate stammered. “Oh, I can’t lie, Jerry was telling me a story, more like an adventure really. One I had also had as a kid, and the time just flew by. Really, I’m sorry.”

Just as Kate was apologizing, Jerry’s dad came in. “What are you sorry about, did you burn the kitchen down?” He laughed at his own joke.

Teri broke in, “It seems Jerry and Bobby obviously took a walk to the edge of the Wood earlier today. Our youngest seems to be up to his storytelling again and made Kate promise not to tell. I know it has something to do with that old Swing.”

“Do you think someone could take me home now? But first, I’d like to say goodnight to Jerry, if you don’t mind?”

“Sure, honey, I’ll take you, and his dad can make sure he’s tucked in and asleep. We don’t want any midnight visits to see Swing tonight.”

“Naw,” Jerry whispered, too, looking up at Kate.

“Sure,” Jerry said, excitement in his voice. “Just come over when you’re ready. But don’t wait too long, okay?”

“Kate, are you ready?” Teri called out. “I’m sure your parents are waiting. Bobby and Jenny should be home anytime.”

“Yes ma’am, coming.” She looked at Jerry one more time and ruffled his hair. “It’s been fun, buddy. I’m so glad I have a new friend now.”

Next week, the conclusion of Swing’s adventure in the Wood.

In the comments below, tell me about times when you got some friends together to work on a project, build a fort or tree house, etc.

Don’t forget to enter your email address to follow me and receive updates.

As far back as I can remember, I loved talking and telling my stories. One of my fondest memories is a squirrel hunting expedition with my grandfather when I was four years old. I chattered away, until he told me, "Baby Cricket, you've got to be quiet. The squirrels can hear you." I sat silent for about 30 seconds, then said, "Oh, PaPaw, let me talk." I still tell stories now; I just write them out instead of talking them out. Well, according to my husband, I still talk them out -- a lot. So many more things to write about since I was four years old. Marriage, children, homes, jobs, grandchildren, all kinds of people. I love people! View all posts by Alma Wallace Fenter